Physical detector area A
Active area of a detector where the incident radiation is absorbed and sensed.

Photoconductors (PC)
Photoconductive detectors based on the photoconductive effect. Infrared radiation generates charge carriers in the semiconductor active region decreasing its resistance. The resistance change is sensed as a current change by applying a constant voltage bias. The devices are characterized by near linear current-voltage characteristics. The electric field in photoconductors is constant across the device. It equals to the ratio of bias voltage and distance between contacts E= V/L
The optimum bias voltage is specified in the final test report and depends on the detector size, operating temperature and spectral response.

Photovoltaic detectors (PV, PVM)
Photovoltaic detectors (photodiodes) are semiconductor structures with one (PV) or multiple (PVM) , homo- or heterojunctions. Absorbed photons produce charge carriers that are collected at the contacts, resulting in external photocurrent. Photodiodes have complex current voltage characteristics. The devices can operate either at flicker-free zero bias or with reverse voltage. Reverse bias voltage is frequently applied to increase responsivity, differential resistance, reduce the shot noise, improve high frequency performance and increase the dynamic range. Unfortunately, at the expense of flicker noise (1/f) in most cases. Photovoltaic detectors are more vulnerable to electrostatic discharges than photoconductors.

Photoelectromagnetic detectors (PEM)
Photovoltaic detectors based on the photoelectromagnetic effect based on spatial separation of optically generated electrons and holes in the magnetic field. The devices do not require electrical bias and show no flicker noise (1/f). The PEM devices are typically used as fast, uncooled detectors of the long wavelength radiation.

Detector formats
Square or rectangular formats are typically used for any IR detectors. Circular geometry is sometimes used for photodiodes. 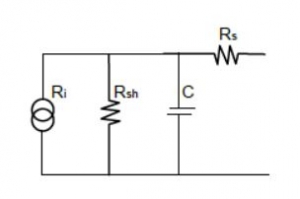 Maximum bias voltage Vmax
The maximum voltage that can be applied to a photoconductor or photovoltaic detector without a risk of its damage.

Dark current Idark
The current that flows in a photodetector in thermal equilibrium with its surrounding. 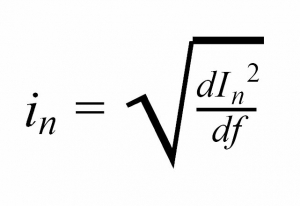 Flicker noise
Flicker noise or 1/f noise is a frequency dependent noise. Its power is typically proportional to 1/f.

1/f noise corner frequency fc
Frequency, at which the low frequency noise equals to the white noise (e.g. the Johnson or shot noise) so the flicker noise dominates at f<fc.

Cut-on wavelength λcut−on
λcuton is the shorter wavelength at which a detector responsivity reaches 10% of the peak value.

Cut-off wavelength λcut−off
λcutoff (50%) is the longer wavelength at which a detector responsivity reaches 50% of the peak value.

Optimum wavelength
a device is optimized for. Typically it is longer than λpeak

Sheet resistance Rsq
It is used to compare the resistances of rectangular photoconductive, PEM and PVM devices with different aspect ratios. It equals to the ratio of product of detector resistance and distance between contacts to detector width.

Linearity range
The linearity range of detector operation is the radiation power range for which the sensitivity remains constant. It is limited by the drop in responsitivity (typically specified for 10% drop).

Time constant τ
Typically, detector time response can be described by the one pole filter characteristics. Time constant is the time it takes detector to reach

of the initial signal value. The time constant is related to the 3dB high cut-off frequency fhi:

Field of view FOV
Angular field of view is the maximum cone angle at which incoming radiation can be captured by a detector. Radiation coming from a larger angle will not reach the detector.

Maximum temperature difference ΔTmax
ΔTmax rated at Q=0, at other Q the ΔT should be estimated as

Maximum heat pumping capacity Qmax
Qmax rated at ΔT=0 , at other ΔT cooling capacity should be estimated as

Preamplifier is an electronic device that converts a weak electrical signal at the input into an output signal sufficient for further processing.

Low cut-off frequency flo
A minimum frequency at which a preamplifier gain reaches -3dB of the peak value or 0 for DC coupling devices.

High cut-off frequency fhi
A maximum frequency at which a preamplifier gain reaches -3dB of the peak value.

Detection module integrates detector, preamplifier, thermoelectric cooler, and other components (e.g. detector biasing circuit, heat dissipation system, optics) in a common package. The operation of detection modules can be described in similar way as for detectors, by specifying their spectral and frequency characteristics of responsivity and detectivity.

Voltage responsivity Rv
The output voltage divided by optical power incident on the detector. For spectral measurements it can be expressed as
Rv(λ)=Ri(λ)·Ki

Low cut-off frequency flo
A minimum frequency at which a AC coupled module responsivity reaches -3dB of the peak value or 0 Hz for DC coupling devices.

High cut-off frequency fhi
A maximum frequency at which a module responsivity reaches -3dB of the peak value.

Output voltage offset Voff
Constant DC component of the output voltage, present both with and without IR radiation.

Power supply input (+) and (-)
Polarity of the power supply related to the ground. Swapping supply connectors may lead to module damage.

Thermoelectric cooler supply input (+) and (-)
Supply polarity for the TEC. Those pins are floating, which means they are not connected to the GND.

Ripple of output current
Unwanted residual periodic variation of the DC (direct current) output of a power supply (or other device) which has been derived from an AC (alternating current) source. This ripple is due to incomplete suppression of the rectified DC waveform within the power supply.

Output current of the built-in power supply
Maximum current that can be delivered by power supply to the preamplifier, usually +/− 100mA .

Settling time of the set detector temperature
The time taken by the cooling system to reach appropriate temperature of the detector.