A graduate of Warsaw University of Technology  in 2002 with a master's degree in electronics engineering.  A Ph.D. degree in technical sciences engineer at the Military University of Technology in 2008. He works at VIGO System S.A. since 2002. He was introducing novel semiconductor production technologies to the company and managing the production. Since January 2015 is a President of the Board of VIGO System S.A. and as a president of Employer Association Polish Technological Platform on Photonics. Since 2017 he is a member of Board of Stakeholders of Partnership Photonics21 taking active participation  european technological development of photonics and microelectronics. He is the author of many publications on methods of manufacture and applications of infrared detectors. He is responsible for application developments of novel sensor systems especially laser based, affordable gas detectors and analyzers. He was taking part in multiple national, european and pure industrial projects. 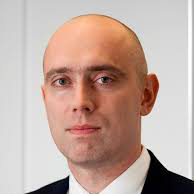 Member of the Board

Graduate of the School of Economics in Warsaw, Poland and Institute d'Etudes Politiques de Paris, France. He has a university degree in economics and an extensive experience in raising capital for companies and investment projects from European funds, national public funds, as well as in debt financing. He took part in the implementation of a number of investments in the project finance formula. He participated in negotiations with financial institutions and private investors. Since 2014 he has worked as a manager in the Financial Advisory Team IPOPEMA Securities SA where he participated in the implementation of several fund raising projects. In 2006-2013 he was an employee of the Ministry of Regional Development in Warsaw where he was responsible for the implementation of projects financed from EU funds, as well as for the preparation and implementation of pioneering projects, of public-private partnership.

Mirosław Grudzień graduated from the Military University of Technology (MUT) in Warsaw, the Faculty of Chemistry and Technical Physics, with MSc degree in technical physics majoring in quantum and solid-state electronics. In 1980 he defended a Ph.D. dissertation on the infrared detection technology. In 1987 he was the co-founder and member of the Management Board (Vice-President) of VIGO System Sp. z o.o., a company that aimed at starting the production of infrared detectors. He remained the Vice-President of the company until 2009 when he became the President of VIGO System S.A., holding this position until December 2014 when he retired. He authored or co-authored 17 patents and several dozens of scientific and popular scientific works in the field of detection technology and infrared techniques. The winner of numerous awards for his achievements in the field of research he was honored in 2013 with the Knight's Cross of the Order of Polonia Restituta for his excellence in the development of entrepreneurship in Poland.

Chairman of Supervisory Board

In 2007, he obtained a Master's degree in School of Economics in Warsaw, Poland on Finance and Banking, and in 2013 qualification of Chartered Financial Analyst. In 2005 he worked as an analyst in Interglobal FB. Next, between 2006 - 2009 he held the same position in Trigon Group. Since March 2007, he has been operating under the name "Przemysław Danowski Business Consulting". Since 2009 he has been associated with the Warsaw Equity Group, initially as Investment Manager, currently he is  Director of the Asset Management Department, Warsaw Equity TFI SA. In 2010 he was appointed Investment Director in Warsaw Equity Investments Sp. o.o. Since 2011 he has also been the Vice President of Value Factory Sp. z .o.o. In the last five years he served as a member of Supervisory Boards of the following companies: WEH Investments SA (2011-2012), Polish Mortgage Fund SA (2012) and IPLEX SA (2012-2013). Currently, from 2012 he has been a member of the Board of Artifex Mudni sp. o.o. Since 2011 he has been associated with VIGO System SA as a Member of the Supervisory Board.

He graduated from the Warsaw School of Economics, Poland majoring in quantitative methods and information systems. He received a master's degree in 1998. He was Chairman of the Board of Sandfield Capital - an entity established in the area of venture capital, CEO of V National Investment Fund SA, Victoria (Ballinger Capital Group), Vice-President of the board of FUND.1 National Investment Fund SA (group Ballinger Capital), Director of Ballinger Capital, as well as investment and financial analyst in Warta-Vita SA. Since 2010 he has been a partner of Lighthouse Capital - entity doing business advisory and investment. He has experience in supervisory functions in the following companies: Automotive Components Europe SA - independent director, Krynicki Recycling SA - member of the supervisory board, Polnord SA - Vice Chairman, Quantum Software SA - member of the supervisory board.

In 1966 he obtained a master's degree at the Faculty of Mathematics and Physics of the University of Warsaw, Poland majoring in physics, and in 1980, defended his doctoral thesis at the Warsaw University of Technology. He worked in 1970 - 1983 in the Department of Experimental Apparatus Optical in Polish Optical Plant in Warsaw as a specialist physicist. Next, he was the Head of the Team Laboratories PCO in Warsaw in 1983 - 1989. From 1989 to 2002 he worked as the Head of Department of Optical Coatings in VIGO System Sp. o.o. In 2006 - 2014 he was Vice President and CEO of VIGO SL Sp. o.o. In 2014 he bacame a member of the Supervisory Board of VIGO System SA.

In 1997 he obtained a master's degree at the Faculty of Management at the University of Warsaw, Poland and, then, in 2010 he earned an MBA at the University of Illinois. He started his career in 1997 - 1999 in the Westdeutsche Landesbank Poland SA as Risk Manager. Then, from 2000 to 2003 he was Financial Controller of Transactional Banking and Treasury in Citibank SA. For more than a decade he has been continuing his career at Bank Handlowy SA: Director of the Office of Strategy and Planning Transaction Banking (2003 - 2009), Chief Financial Transaction Banking Region Central and Eastern Europe, Citigroup (2010-2013), Head of Liquidity Management and Business Analysis in Corporate Banking Sector (2013 - now). In 2014 he became a member of the Supervisory Board of VIGO System SA

He has many years of practical experience in business management and numerous training and courses in the field of company law and tax law, supported by studies in the Warsaw School of Economics, Poland. He has a secondary education. He runs his own business under the name of Mawar Marek Wiechno. He is a member of the Board of the following companies: DEM Sp. o.o., PROMO Sp o.o., POL T and T Sp. o.o. From 2014 he sits on the Supervisory Board of VIGO System SA.